The 1998 Annual Meeting was a big success. All who attended loved the uniqueness of the setting in the Smokey Mountains, the excellent facilities, and 3 gourmet meals per day.

Highlights of this year's accomplishments were:

I drove down on the Blueridge Parkway - it takes longer, but the scenery is spectacular.
Bearfence Mountain summit at mile 56.4 provides a 360 degree view. It is a 0.8 mile roundtrip hike
from the parking lot, including some exciting rock scrambles. Scroll right for the full 360 degree view. 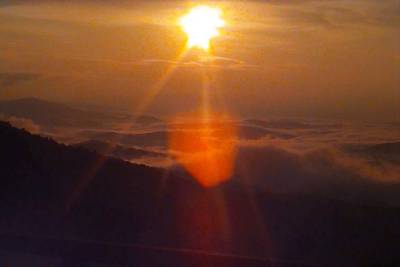 Dawn in the Smokey Mountains, near mile 300. The entrance to Wildacres is between mile
336 and 337. 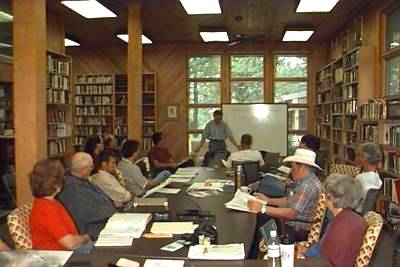 Meetings started at 9:30 a.m. in the library, which was ours for the week.
John Gulland leads a session on the new Minnesota energy code - coming soon
to a town near you. 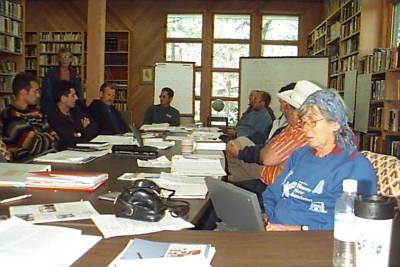 Jay Hensley from SNEWS magazine was there for the week, and was busy
taking notes and interviewing masons for an upcoming special issue that will
cover the MHA meeting and discussions in detail. Subscribe now! 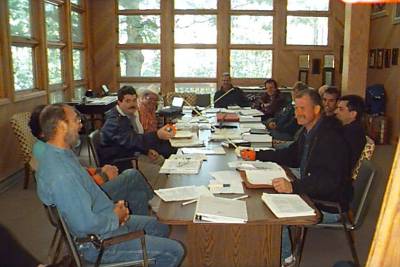 Dann Carnes and Doug Fry display their prizes - combination metric/inch tape measures,
which were the reward for the top 2 scores in the MHA certification exam. 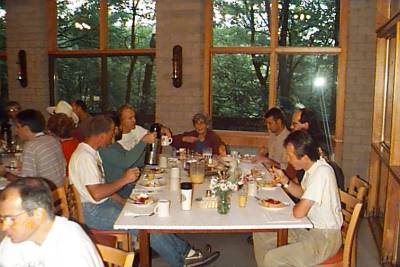 Did I mention the 3 gourmet meals per day? How does homemade
Belgian waffles with strawberries and whipped cream for breakfast sound? 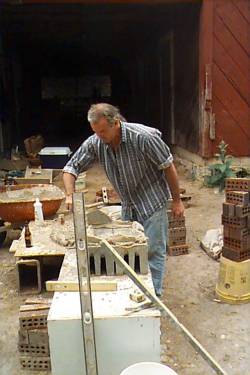 MHA President Pat Manley takes his hands-on certification. It consists of a
2 foot length of brick chimney, built to a 1/8" tolerance. An alternative
is to work 40 hours under a certified heater mason. Since there were no
certified heater masons prior to this meeting, everyone had to take
the hands-on test. 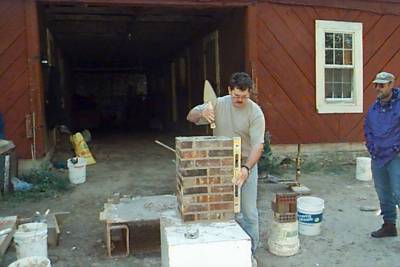 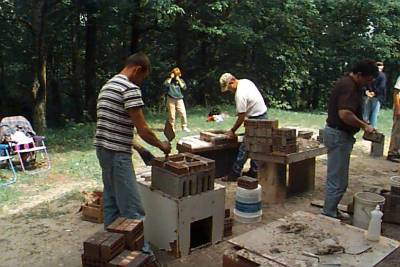 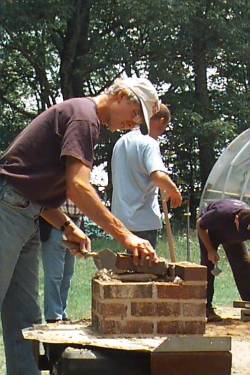 Tom Trout takes his hands on. 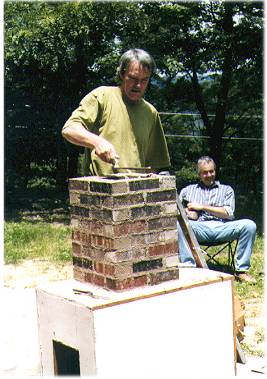 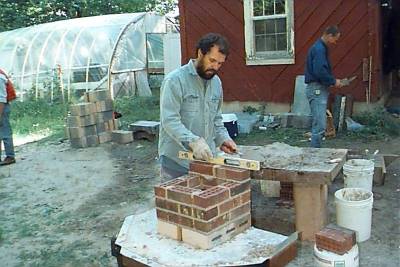 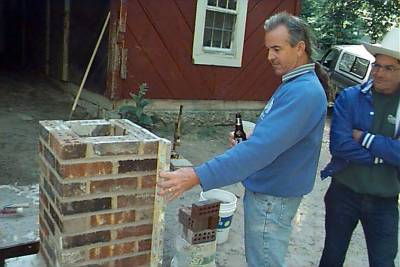 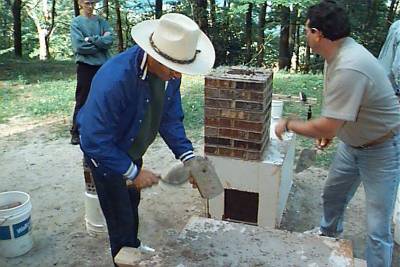 Frank Sotero and Dann Carnes do a teardown to prepare for the next test.
Clay/sand mud was used (Goldart clay). 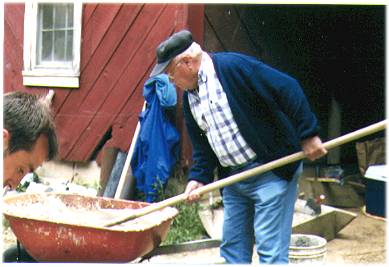 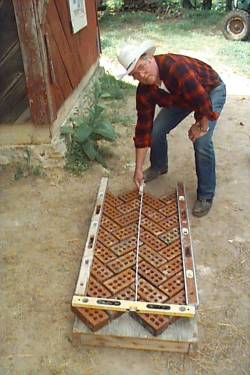 Jerry Frisch demonstrates the layout for
a true herringbone pattern. 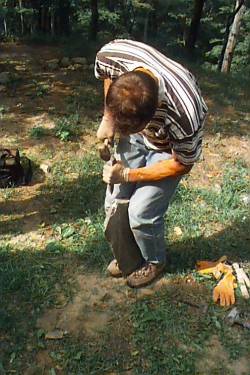 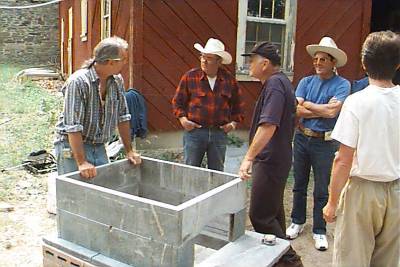 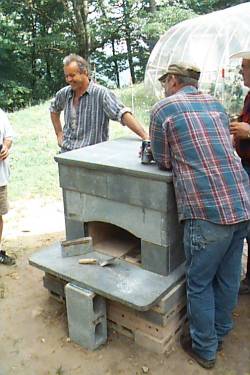 Shooting the breeze over a beer. 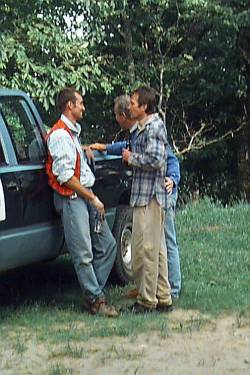 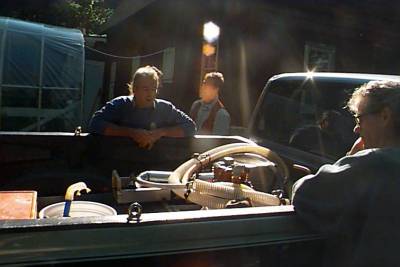 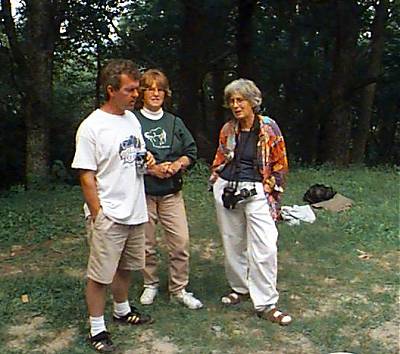 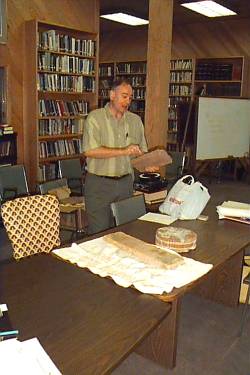 Guest lecturer, historian Peter Austin gives a presentation on the work of the
Guastavino Company. It was a special technique for building lighweight masonry
vaults from 1" tiles. The company did amazing work, including the dome of the
Cathedral of St. John the Divine in New York City, which was built without forms.
Afterwards, we went on a field trip to the Basilica of Saint Lawrence in Asheville, N.C.
to view some spectacular examples of Guastavino's work.. 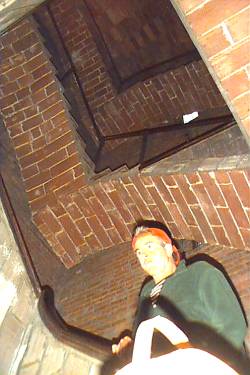 We were granted access to parts of the basilica not normally accessible
to the public. This is an out of the way staircase, unplastered
and showing the 1 X 4 X 12 tile construction.
The tile vaults under the steps were as thin as 2 1/2 inches in some places. 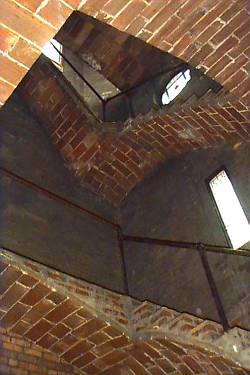 Another view of the same staircase. The vaults had a variable
radius in both directions. Unfortunately, my digital
camera ran out of memory at this point. 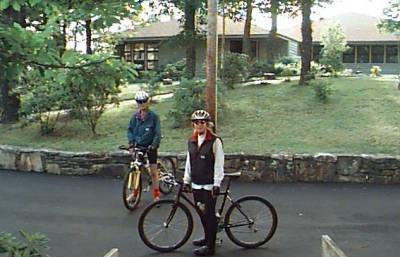 John Gulland and his partner Wendy brought their mountain bikes. I joined
them on a couple of early morning jaunts. There is a beautiful loop from Wildacres
to Little Switzerland that takes about 40 minutes and includes some
VERY exciting downhill paved sections. 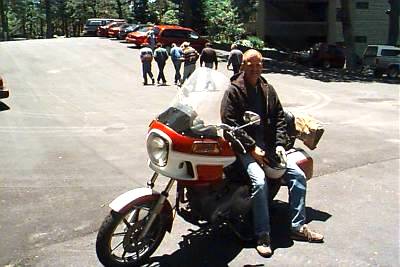 Doug Fry arrived from Michigan on his 1976 Harley Davidson Sportster. 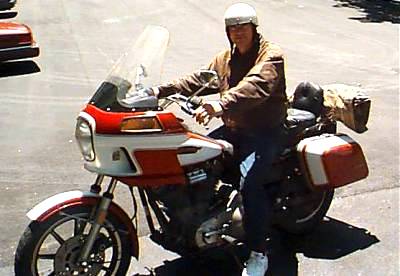 The highlight of my trip was taking Doug's Harley for a spin on the
Blueridge Parkway. Definitely a macho machine. 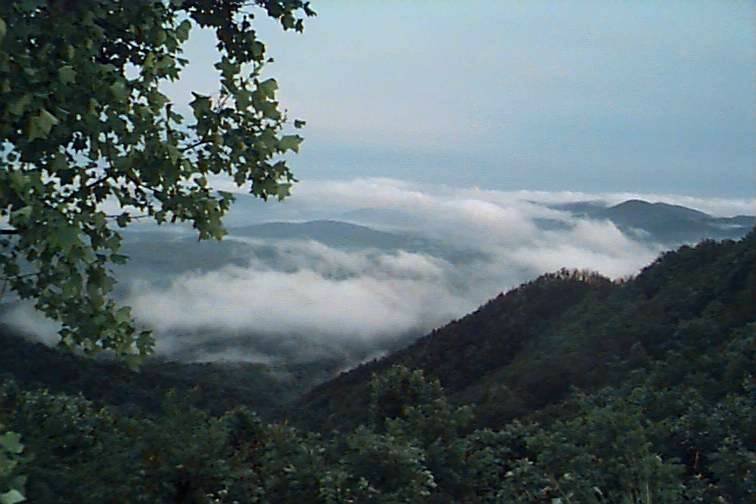