Last Monday I visited a heater built about 4 years ago in Warren, VT for a very nice client from Cambridge, MA.  The heater was a large stone heater (Warren Heater on my website).  We fit the heater
with a series of 5 stainless steel water coils into the upper combustion chamber of the contraflow core.  The loops exit the rear of the heater and are plumbed together so there is one intake for cold water and one exit for heated water, making it one long loop with about 96" of stainless pipe in the chamber.

The client paid some serious money to have engineers design her a basically experimental system that would integrate solar hot water panels, the masonry heater, and a boiler into system designed
to keep a 3000 gallon water storage tank under the basement slab at 120 F, which would keep the home heated to at least  50 F  during the owner's long absences without the use of fossil fuels.  The client
knew she was basically funding a research project, and she's a saint for that.

After a few years of use they finally called me to let me know that the heater was producing no hot water.  I felt something was surely wrong, so went down for a site visit.
The engineers had set the circulation pump for the flow of the system to be set on/off with a stack temperature sensor.  It took about 5 minutes to see that they had set the sensor
into the wrong flue, in this case a 6" class a chimney meant for an extra flue going into the basement.  Whoops.  They had never asked me to confirm during the install of the sensor.

The photo here shows the computer monitoring system used for the house, which can be controlled, viewed, and adjusted by a remote user.  It's set up in a permanent location in the basement.
You can see that the heater's water coil plumbing is a closed loop, and after exiting the heater enters the 3000 gallon tank and exchanges via a copper loop.  Interestingly, after years of use there
hadn't been a pressure release, so the system must have been moving the water enough without the circulation pump to allow the water to exchange heat into the tank and cool enough.  They did say that
the pipes would make a terrible racket in the wall.

We were able to call a guy who disabled the sensor in the wrong stack and have the circulation pump set on.  We set it to the lowest speed, and got the exit temp up to about 105 F (from the rear of the coil manifold). After about a 1 hour of observation this increased the temperature in the tank 1 degree F.  In time they may replace the pump and get something with a lower speed.  The racket in the wall stopped promptly.

The concept that the system works under is that the solar panels will bring the 3000 gallons to 120 F during the summer and fall without too much trouble, and then the daily use of the heater and intermitten
winter use of the panels will basically maintain this temperature.  The water in the tank then heats the loop for the radient floor system.

When the project was built I felt they made it too complicated,and that there were too many engineers walking on top of each other.  This I'm sure was the case, but in time and with a lot of observation
they are getting the kinks out, and things are coming together.  They will have to change the on/off sensor for the heater water coil and tune up the flow rate before we will know how well the heater
works into the system.  It won't quite have the impact they calculated, as they figured it would be adding about 20,000 BTU/ hr into the system, and this is largely overstated.  Hopefully sometime next winter
we'll have a better sense of how well the system works.

Anyhow, it was a pretty interesting morning on the job.   Wm. 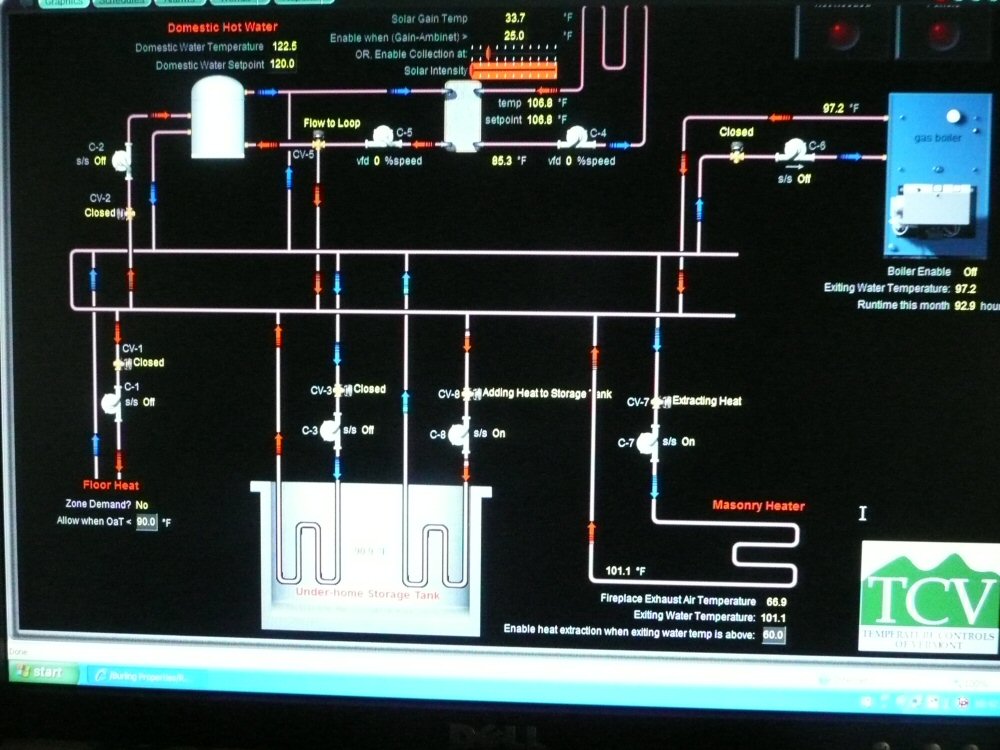